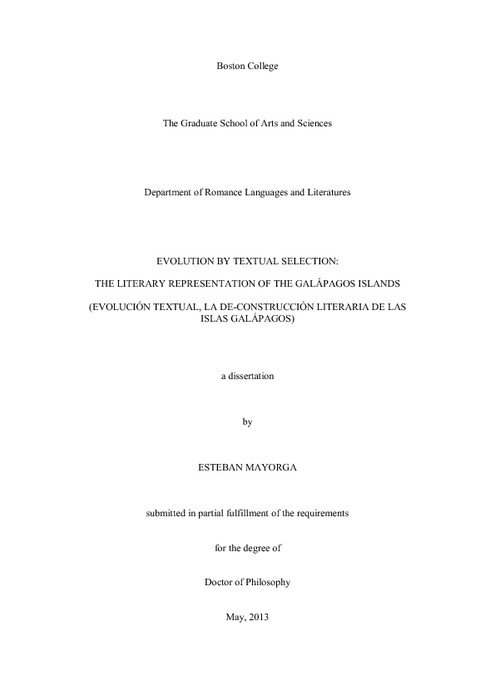 This dissertation takes a literary and cultural studies model to explain the textual representation of these unique islands since their discovery until present day. The main argument suggests that the depiction of this crucial space for modernity in Western thought, given the rhetoric of travel and fiction writers, deploys the insular area with the intention of conceiving new forms of political displacement and identity endeavors in addition to those of the nation building project that took place in the mainland. As a result of colonial enterprises, scientific excursions, exile, tourism, journalistic pieces, expeditions, etc., travel writings of the Galápagos record the experience of reshaping this space à propos of a theory of travel and travel writing mediated by narratives that complement the formation of the state and its national imagery. The insular space functions as a vacant signifier where travelers are able to communicate their own signified upon narrating the experiences of their journeys. This phenomenon creates a profound conceptual and political division between the identity of the isles and the nation of Ecuador, and the findings of this study can be extrapolated to a historical specificity of explorations and representations that deal with narrative constructions of highly condensed spaces throughout Latin America as a whole, if one can claim they are a case study of an "unfinished" modernity. This separation created a rupture leading to fundamental variations in the manner in which local inhabitants and foreign entities interpret the insular province nowadays. The literature of the Galápagos reflects the scale of friction, migratory tendencies into the islands, and how global interests prevail in the appropriation of the space, reshaping the subjective individuality of the host culture. The first chapter examines texts of discovery written during the colonial enterprise of Spain. Given the anthropological void in the Galápagos, these initial pieces of writing emphasize the monstrosity of the landscape and the biota, but also portray a possibility to find riches. This description ignites a dichotomist infernal-paradisiacal appraisal of the archipelago, and recreates it as a warped textual space which, in turn, develops an imagery that demonstrates the flexibility of the deserted island: writers set forth almost any form of representation that favors imperial interests. The second chapter analyzes travel literature written in English during the nineteenth century. These texts define the islands as a world within itself rather than as a province of Ecuador, and have a major impact on its imagery given the authority of its writers. In the midst of Latin-American independence, the nation-building project, and the quest for a cosmopolitan state, foreign texts are detached from the social and political reality of the entourage, and transmit a fallacious notion of desertedness, which allows for future occupations of transcontinental scope. These books also create a bilingual literature that preludes the migratory movement and touristic commerce that currently defines this province. The final chapter focuses on three books written by local authors and how they combat or appropriate previous insular narratives providing a native perspective. A historiographical novel, defined as a "foundational fiction" that portrays the Galápagos as a prison and pirate hideout, exhibits the violent environment of the newborn Ecuadorian Republic. This piece generates a fissure in the international community that regards the islands as paradise and still is, therefore, largely ignored. A second narrative shows how the Galápagos occupation of the United States during World War II is crucial for interpreting and understanding the archipelago during the twentieth century. It preludes current international interests that dominate policy-undertakings, particularly the ones concerning tourism, environmental, and geopolitical endeavors. Finally, a quarto book exemplifies how texts have enticed and caused not only a critical political and national divorce between the nation and the insular region, but also a market-oriented global milieu triggering migration towards this zone. The discussed works include Tomás de Berlanga's "Carta a su majestad describiendo su viaje" (1535), Sarmiento de Gamboa's Historia de los incas (1572), Darwin's Voyage of the Beagle (1839), Melville's The Encantadas, or Enchanted Isles (1854), Manuel Bilbao's El pirata del Guayas (1855), Bolívar Naveda's Galápagos a la vista (1952), and Hugo Idrovo's Galápagos: huellas en el paraíso (2005). I use critical theory from Adorno, Bartkowski, Bloom, De Certeau, Deleuze, Edmond, Mignolo, Molloy, Musgrove, O'Gorman, Pratt, Sommer, Todorov, Van den Abbeele, and others to show the impact of the construction of an imaginary space that morphs incessantly and responds more to writers' interests than to the inherent qualities of the isles.