Essays on the Economic Causes and Consequences of Public Health 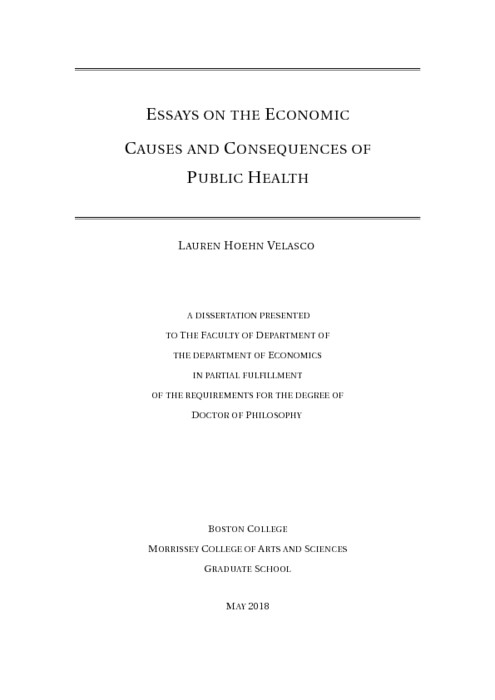 This dissertation tracks a particular public health program and examines the economic causes and consequences of the institution of public health. I follow the United States rollout of county-level health departments (CHDs) over 1908 to 1933 and track the short-run benefits, the long-run benefits, and the factors that led to adoption. At the turn of the twentieth century, rural areas lagged behind urban centers in access to public health services, despite the fact that there had been convergence in urban-rural mortality. With 60 percent of the US population living in rural areas, this lack of public health was a population-wide problem. By 1908 the rural health problem drew national attention from the United States Public Health Service (USPHS) and health-interested private organizations. These organizations targeted rural health conditions by opening local public health departments that were operated by the existing county government. This revolutionary approach initiated the first nationwide rural public health program in United States history. The rollout of health infrastructure improved sanitation and provided access to child health services in under-served areas throughout the US. The sanitation improvements included inspections, hygiene training, and installation of toilets, wells, and drainage. Health services appeared in the form of exams, nutritional consults, immunizations, and midwife hygiene training. Local tax dollars provided the majority of funding for this program, although supplemental support arrived from outside organizations including the USPHS, state governments, the Rockefeller Sanitary Commission (RSC), and the Sheppard-Towner Act. In the first chapter, Taxation, Inequality, and the Provision of Local Public Health, I consider the factors that shaped the appropriation of rural public health. Using digitized county-level records on property values and taxation, I argue that adopting regions had local governments centered around the county as compared to the town or township. Within state, specific counties that adopted this program had more active local governments, as measured by county taxation, county debt, and measured property values. Next, because CHDs provided a bridge between the rural and urban areas of the county, I consider whether the CHDs were redistributive in nature. I find that CHDs operated in areas with higher levels of land and income inequality, which is distinct from what related literature has established with education spending. These results suggest that public programs based on local revenue may help to mitigate disparities within the region of jurisdiction but may exacerbate inequalities between adopting and non-adopting areas. External funding from higher levels of government as well as private donors helped to randomize the effort and spread the health services more evenly between counties. In the second chapter, Explaining Declines in US Rural Mortality, 1910-1933: The Role of County Health Departments, I assess the short-run impact of CHDs in terms of aggregate county-level mortality. Using two novel datasets--CHD administrative records and US county-level rural mortality--I track the rollout of CHDs throughout the United States and use variation in when and where CHDs operated to identify the mortality benefits. With an event study design, I establish that CHD entry led to a decline in infant mortality, but provided little advantage to overall population health. For infants, CHDs prevented two deaths per 1,000 births, which accounts for 8-10% of the period-specific mortality decline. The effect is most substantial in rural-only counties, as well as in the Midwestern region of the United States. In these areas, infant mortality declined by three to four deaths per 1,000 births. In the final chapter, The Long-term Impact of Public Health Measures Targeting Children, I examine whether the public health initiative was effective at improving adult human capital. While previous studies have established the lasting detrimental effect of poor child health, fewer studies have evaluated whether public health programs can mitigate these adverse effects. To address this question, I estimate whether childhood exposure to a public health intervention affects adult income, education, and health. The historical vantage point of the CHD program allows me to follow exposed children through adulthood and observe the life-cycle benefits, including the total lifespan. To estimate the long-term benefits, I use linked census data, World War II enlistment records, and Social Security death records and exploit variation in the timing, location, and age of CHD exposure. Based on this methodology, I find that children treated under the age of five show later-life earnings improvements of three to four percent. I investigate the mechanisms underlying the effect and demonstrate that higher earnings emerge from better adult health, measured by cognition, body mass index, and the probability of living past age 80.