"Restricted Movement" and Coordinates of Freedom 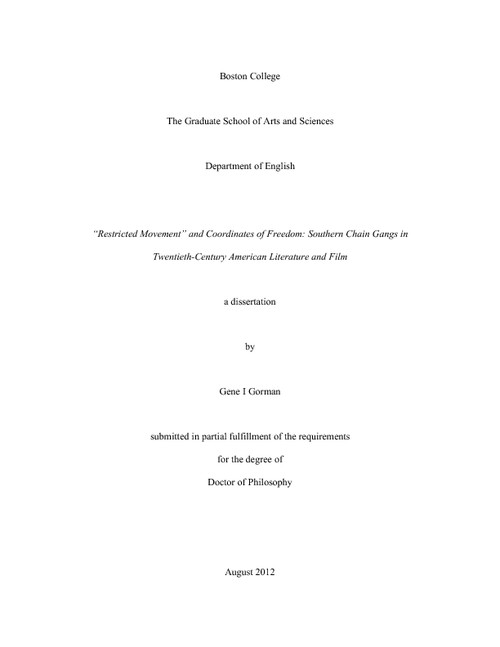 For more than a century, the chain gang has been glamorized, criticized, abhorred, and often explained away as an economic necessity or natural byproduct of historical circumstances. After Emancipation, this centuries-old approach to punishing criminals offered an immediate palliative for southern plantation owners in need of field hands, northern coal and steel interests and railroad tycoons in search of blasters and miners, and eventually government officials who identified the South's antiquated infrastructure as its greatest barrier to integration into a regional and national economy. Heavily influenced by Hollywood, the blues, oral histories and folkways, archived photographs, and literary representations, many people now view the chain gang as a relic of a bygone era of southern prejudice and brutality. After all, history does not cast the men and women who served on chain gangs as heroic workers and, if they are acknowledged at all, they are only occasionally figured as victims of the political, social, and economic forces that led to their convictions and servitude. And yet, paradoxically, labor historians and others have argued convincingly that the chain gang, even with all its warts and abuses, actually made southern economic progress possible. Entering this still-vibrant, contested territory, "Restricted Movement" and Coordinates of Freedom focuses on depictions of chain gangs in selected literary works and films from 1901 to 2000, including Charles W. Chesnutt's The Marrow of Tradition (1901) and All the King's Men (1946) by Robert Penn Warren and the films I Am a Fugitive from a Chain Gang (1932), Sullivan's Travels (1941), The Defiant Ones (1958), and O Brother, Where Art Thou? (2000). This dissertation attempts to make sense of a multitude of historical and social conditions that bear specifically on chain gangs and convict labor, including black criminality, white supremacy, the Good Roads Movement, race-based electoral politics, and industrialization. In addition to exploring these vexed arguments about servitude and progress, this dissertation also explores how the chain gang, real and imagined, serves as its own special form of segregation. Beginning with the work of Edward L. Ayers, Alex Lichtenstein, Matthew Mancini, and others in the 1980s and 1990s, a handful of southern and labor historians broadened the study of postbellum race, crime, and punishment to consider whether convict-leasing programs and chain gangs in the late nineteenth and early twentieth centuries really did result in a form of "neo-slavery." In other words, these historians asked, did these practices actually "re-enslave" African Americans in the American South between 1865 and 1940? And if so, what were the social, political and cultural implications of this re-enslavement? How did these practices shape the experience and consciousness of both blacks and southern whites? Moreover, in a culture that speaks so often of slavery's terrible legacies, how might a deeper understanding of convict leasing and chain gangs offer its own particular lessons about race, history, and justice in the United States since the Civil War? My hope is that the methods and approaches laid out in this dissertation will invite other scholars to grapple with the ways in which chain gang history and cultural history inform one another.